Hence, Central Government employees as well as pensioners are entitled for DA/DR at the rate of 100 percent of the basic with effect from 01.01.2014. The increase is in accordance with the accepted formula based on the recommendations of the 6th Central Pay Commission.

7th Central Pay Commission
The Union Cabinet today gave its approval to the Terms of Reference of 7th Central Pay Commission (CPC) as follows:-
a)      To examine, review, evolve and recommend changes that are desirable and feasible regarding the principles that should govern the emoluments structure including pay, allowances and other facilities/benefits, in cash or kind, having regard to rationalization and simplification therein as well as the specialized needs of various Departments, agencies and services, in respect of the following categories of employees:-
i.          Central Government employees-industrial and non-industrial;
ii.         Personnel belonging to the All India Services;
iii.        Personnel of the Union Territories;
iv.        Officers  and   employees   of  the   Indian  Audit  and   Accounts Department;
v.         Members of regulatory bodies (excluding the Reserve Bank of India) set up under Acts of Parliament; and
vi.        Officers and employees of the Supreme Court.
b)      To examine, review, evolve and recommend changes that are desirable and feasible regarding principles that should govern the emoluments structure, concessions and facilities/benefits, in cash or kind, as well as retirement benefits of personnel belonging to the Defence Forces, having regard to historical and traditional parities, with due emphasis on aspects unique to these personnel.
c)      To work out the framework for an emoluments structure linked with the need to attract the most suitable talent to Government service, promote efficiency, accountability and responsibility in the work culture, and foster excellence in the public governance system to respond to complex challenges of modern administration and rapid political, social, economic and technological changes, with due regard to expectations of stakeholders, and to recommend appropriate training and capacity building through a competency based framework.
d)     To examine the existing schemes of payment of bonus, keeping in view, among other things, its bearing upon performance and productivity and make recommendations on the general principles, financial parameters and conditions for an appropriate incentive scheme to reward excellence in productivity, performance and integrity.
e)      To review the variety of existing    allowances presently available to employees in addition to pay and suggest their rationalization and simplification, with a view to ensuring that the pay structure is so designed as to take these into account.
f)       To examine the principles which should govern the structure of pension and other retirement benefits, including revision of pension in the case of employees who have retired prior to the date of effect of these recommendations, keeping in view that retirement benefits of all Central Government employees appointed on and after 01.01.2004 are covered by the New Pension Scheme (NPS).
g)      To make recommendations on the above, keeping in view:
i.          the economic conditions in the country  and need for fiscal prudence;
ii.         the need to ensure that adequate resources are available for developmental expenditures and welfare measures;
iii.        the likely impact of the recommendations on the finances of the State Governments, which usually adopt the recommendations with some modifications;
iv.        the prevailing emolument structure and retirement benefits available to employees of Central Public Sector Undertakings; and
v.          the best global practices and their adaptability and relevance in Indian conditions.
h)      To recommend the date of effect of its recommendations on all the above.
The Commission will make its recommendations within 18 months of the date of its constitution.  It may consider, if necessary, sending interim reports on any of the matters as and when the recommendations are finalised.
The decision will result in the benefit of improved pay and allowances as well as rationalization of the pay structure in case of Central Government employees and other employees included in the scope of the 7th Central Pay Commission.
Background
Central Pay Commissions are periodically constituted to go into various issues of emoluments’ structure, retirement benefits and other service conditions of Central Government employees and to make recommendations on the changes required.
Source : PIB

The statements of Confederation, CHQ and NFPE, CHQ will be published shortly after collecting full details.
Posted by AIPEU, GR C, SOUTH PRESY. DIV. at 19:03


Eligibility for above vacancies

Age limit: 18-27 years - (a) For General Category (Unreserved Applicants) the applicable relaxation is provided to persons belonging to SC/ST/OBC/PH/Ex-serviceman candidates as per the extant orders. The age limit will be as on 27.03.2014.
Educational qualification:
(1) 10+2 standard or 12th class pass from a recognized university or Board of School Education or Board of Secondary Education with English as a compulsory subject (excluding vocational streams).
(2) The applicants should have studied local language of the State or Union Territory of the concerned Postal Circle or in Hindi as a subject at least in Matriculation level or equivalent.
Cost of Application Form Registration: Rs. 100/-  for all categories of applicants who have registered.
Examination fee: The Examination fee prescribed for all male applicants in General and OBC categories is Rs. 400/-. Candidates belonging to Scheduled Castes / Scheduled Tribes / Physically Impaired/ Women are exempted from payment of Examination Fee.
Mode of Payment: The applicants have to approach their nearest e-payment Post Offices, (listed under e-payment link of www.pasadrexam2014.in) and to produce Fee Payment Challan printed by him & to pay the FEE in CASH (INR) only. Once the fee has been paid, the Registration process is completed.

Mode of Apply : The aspiring candidates are requested to access the website: www.pasadrexam2014.in for further details like vacancies, eligibility criteria, details of fee etc. The Applications are to be submitted on line and the last date for registration of applications on line is 23:59 Hours of 27th March, 2014.
Click here to read Official Notification
Click here to read Instructions “How to Apply ? “
Click here to Apply online (for all Circles) -  (Registration link will available soon…)
Date for start Online Registration: 26.02.2014
Last date of Online Application: 27.03.2014
Posted by AIPEU, GR C, SOUTH PRESY. DIV. at 09:15 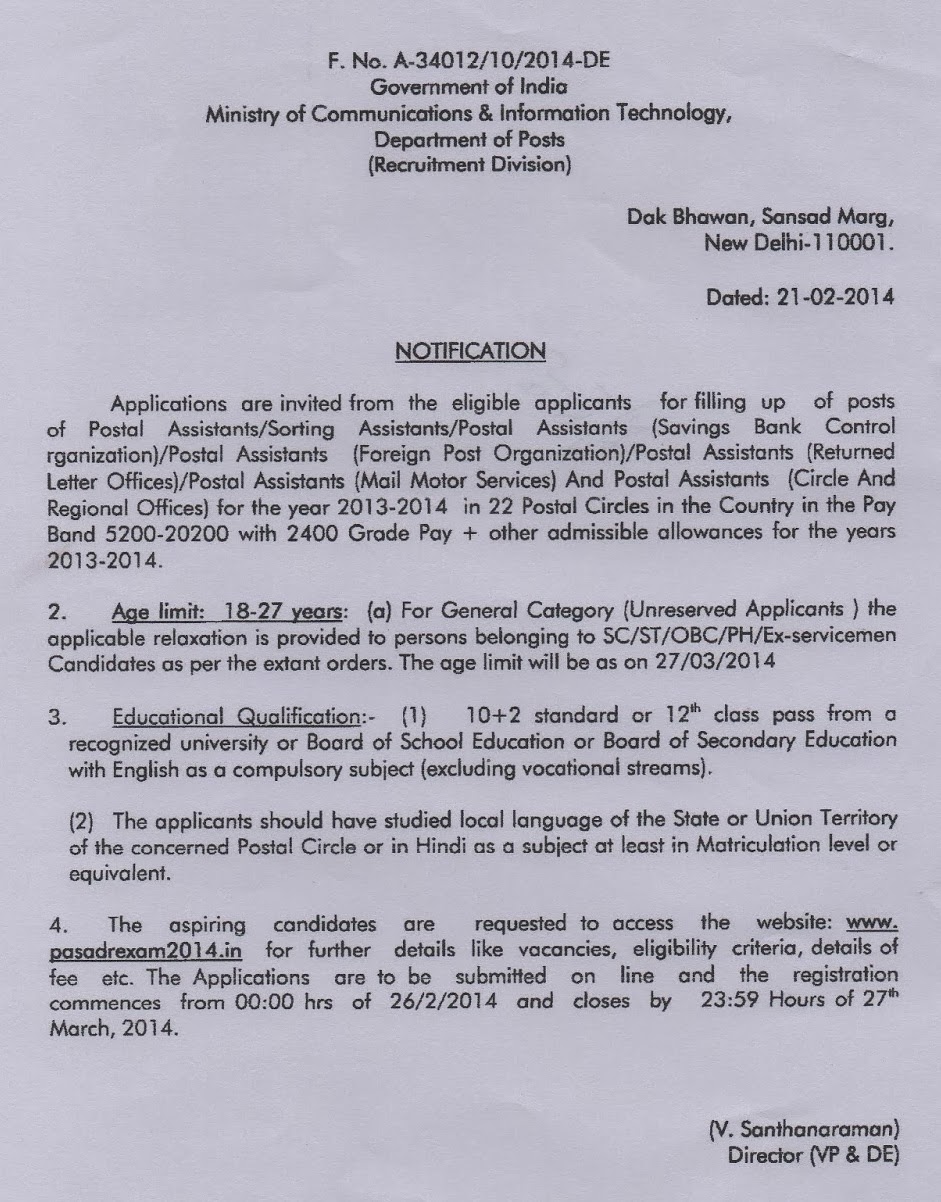