MERIT  LIST  OF  QUALIFIED  CANDIDATES  IN  LGO  EXAMINATION  HELD  ON  16-09-2012
The merit list of the successful candidates in the LGO Examination 2012 is produced below.  Congratulation to all succesful candidate. 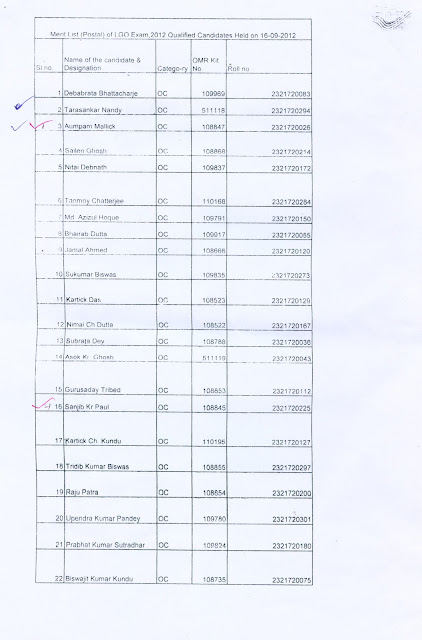 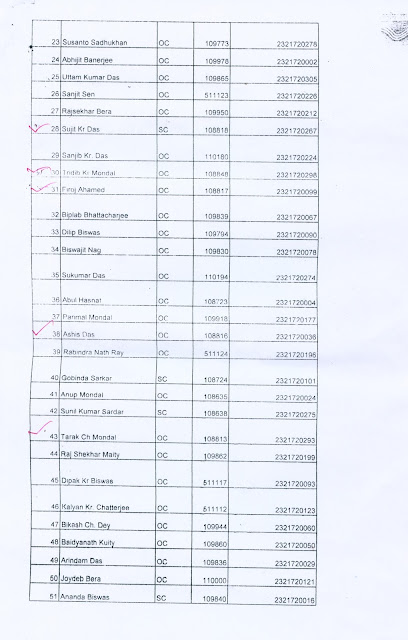 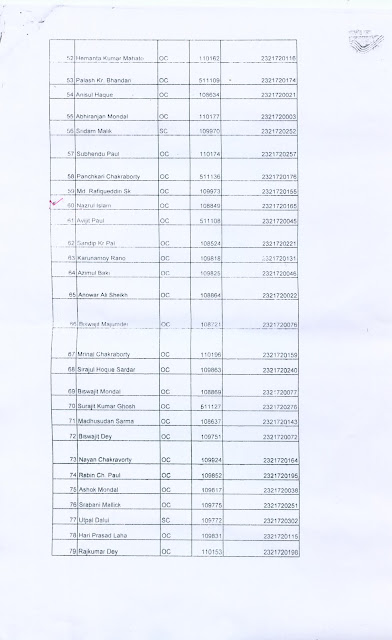 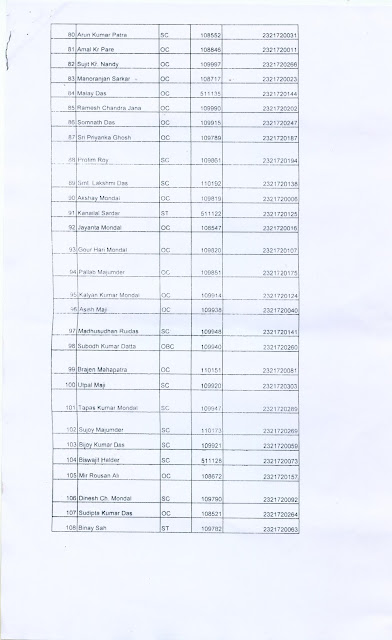 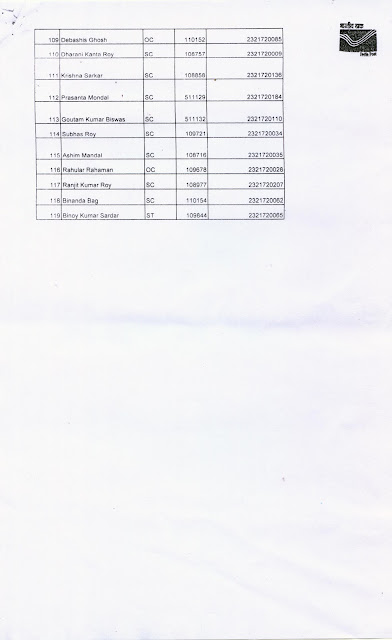 About a million Central Government employees will take part in the one day token strike tomorrow, the 12th December, 2012. The employees organisations in the Postal, Income-tax, Audit and Accounts, Printing and Stationery, Geological Survey of India, Survey of India, Customs, Central Excise, Indian Bureau of Mines, CGHS, Ground Water Board, Central Water Commission, Central Public Works, Census, Atomic Energy Commission, Defence Accounts, Indian Space Research Organisation, Andaman Nicobar and Pondicherry Administration, Medical Stores depot and many other Public Utility Departments of the Government of India have confirmed their participation in the strike action. The strike is organised by the apex level Confederation of Central Govt. employees and workers, New Delhi on the basis of the strike notice served on 19.11.2012 for a settlement of the 15 Point charter of demands (copy enclosed)

The Central Government employees throughout the country are agitated over the Government's fresh move to enact the PFRDA Bill in this session of the Parliament. It is surprising that even after the uncontested findings of the Committee set up by the Government that the new Contributory Pension Scheme will only increase financial outflow for the Government and the beneficiaries also stand to lose heavily on account of it, the Government has chosen to go ahead with the New Scheme. The recent decision of the Government to allow FDI in pension sector will only further help the transnational corporation to access to the hard earned savings of the Indian Common people to maximise their profit.


Apart from scrapping the New Pension scheme, the employees are demanding the setting up of the 7th Central Pay Commission for wage revision, reintroduction of the Universal Public Distribution system stoppage of outsourcing of Governmental functions, contractorisation, privatisation etc. regularisation of Grameen Dak Sewaks, contingent, casual and daily rated workers, lifting the ban on creation of posts, filling up the vacant posts revival of the negotiating forum, JCM etc.


Due to the breakdown of the negotiating machinery, there had been no dialogue between the Government and the employees for the past several years. The employees are extremely critical of the attitude of the Government using the sovereignty of the Parliament to reject the award given in favour of the workers by the Board of Arbitration which is not only contrary to the terms of arbitration but unethical too. The continuing vindictive attitude of the C& AG administration against the employees and union functionaries for normal and peaceful trade union activities is highly deplorable.


If the Government refuses to take note of the resentment and initiate steps to bring about settlement, the agitation is bound to escalate in the form of indefinite strike action encompassing even other section of the employees.


To the Chief Reporters/Editors for favour of publication in your esteemed New paper.

1. Revise the wages of the Central Government employees including Gramin Dak Sewaks with effect from 1.1.2011 and every five years thereafter by setting up the 7th CPC.

2. Merge DA with pay for all purposes with effect from. 1.1.2011 including for Gramin Dak Sewaks.

3. Remove restriction imposed on compassionate appointments and the discrimination on such appointments between the Railway workers and other Central Govt. employees.

5. (a) Revive the functioning of the JCM. Convene the meeting of the Departmental Councils in all Ministries/Departments. Settle the anomalies raised in the National Anomaly Committee as also in the Departmental Anomaly Committees. Hold National Council meetings as specified in the JCM constitution. (b) Remove the anomalies in the MACP Scheme.(c) Grant recognition to all Associations/Federations, which have complied with the formalities and conditions stipulated in the CCS(RSA) Rules.

9. (a) Stop the proposal to introduce the productivity linked wage system; (b) discard the performance related pay structure; (c) introduce PLB in all Departments; (d) remove the ceiling on emoluments for bonus computation.

12. Make the right to strike a legal and fundamental right of the Government employees on par with the other section of the working class.

13. Grant Five promotions to all employees as is provided for in the case of Group A services.

14. (a) Withdraw the PFRDA Bill. (b) Rescind the decision to allow FDI in pension sector;(c) Scrap the new contributory pension scheme (d) Extend the existing statutory defined pension scheme to all Central Govt. employees irrespective of their date of entry in Government service.