In accordance with the provisions of Sub Section (1) of Section 22 of the Industrial Disputes Act, 1947, we hereby notify that all the Postal/RMS/MMS/Administrative & Postal Accounts Employees and the Gramin Dak Sewaks will go on two days strike on 20th and 21st February 2013. The demands for acceptance of which the employees embark upon two Days Strike are detailed in the Charter of Demands enclosed.

1. Take Concrete measures to contain price rise.
2. Take Concrete measures for linkage of employment protection with the concession/incentive package offered to the entrepreneurs,
3. Ensure Strict enforcement of all basic labour laws without any exception or exemption and stringent punitive measures for violation of labour laws,
4. Universal social security cover for the unorganized sector workers without any restriction and creation of a National Social Security Fund with adequate resources in line with the recommendation of NCEUS and Parliamentary Standing Committee on Labour.
5. Stoppage of disinvestment in central and state PSUs.
6. No Contractorisation of work of permanent/perennial nature and payment of wages and benefits to the contract workers at the same rate as available to the regular workers of the industry/ establishment
7. Amendment of Minimum Wages Act to ensure universal coverage irrespective of the schedules and fixation of statutory minimum wage at not less than Rs 10,000/-.
8.   Remove all ceilings on payment and eligibility of Bonus, Provident Fund; Increase the quantum of gratuity.
9.   Assured statutory Pension for all
10.       Ensure Compulsory registration of trade unions within a period of 45 days and immediate ratification of the ILO Conventions nos 87 and 98

1.      Appoint Seventh Central Pay Commission for revision of wages of Central Government Employees including Gramin Dak Sewaks. Grant merger of 50% of DA with pay for all purposes, including GDS.
2.      Stop abolition of posts and restore all abolished posts with immediate effect.
3.      Grant Civil Servant status to Gramin Dak Sewaks and extend all benefits of regular employees to GDS also. Enhance GDS Bonus ceiling from 2500/- to 3500/- . End discrimination in wages and other service conditions.
4.      Revise the wages of Casual, Part-time & contingent employees with effect from 1.1.2006 at par with the minimum pay scale implemented as per 6th CPC recommendations. Regularisation of the services of casual labourers.
5.      Drop the proposal for privatization of Postal Sector and retrograde clauses of the National Postal Policy 2012.
6.      Revision of OTA rates as per the Arbitration award.
7.      Complete the cadre restructuring and honour the assurance given to staff side.
8.      Remove arbitrary restrictions imposed on compassionate appointments. 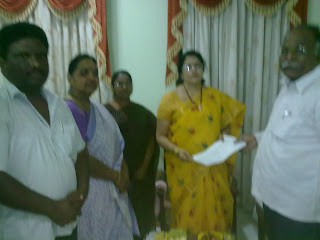 Hon'ble Minister assured to take necessary swift action to settle  the issues as early as possible.