72 hours Sit in demonstration at the office of the Ch PMG, WB Circle, Yogayog Bhawan has been started from 21.05.13 in the call of NFPE, Group of Union, WB Circle. A large number of members has participated along with Circle Leaders at the said program. 25 members from our division attended & 12 members alongwith divisional leadership stayed at the night on 22.05.13. 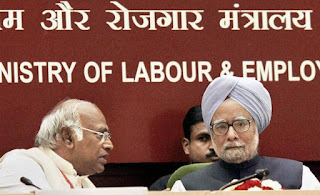 Prime Minister Manmohan Singh on Friday said some of the demands raised by the various central trade unions, for which they organised a nationwide general strike for two days in February, were in advanced stage of consideration of the government.
Those demands include universal social security cover for workers in both organised and unorganised sectors and the creation of a National Social Security Fund, fixing a National Floor Level Minimum Wage (NFLMW) and provision of a minimum pension of Rs. 1000 a month under the Employees Pension Scheme.

“The Cabinet has already approved amendments to the Minimum Wages Act, 1948 to provide for a statutory NFLMW,” Dr. Singh said, inaugurating the 45th session of the Indian Labour Conference here.
The trade unions focused on a number of issues relating to the welfare not only of the working classes but also people at large. These include demands on which there could be no disagreement. “Demands for concrete measures for containing inflation, for generation of employment opportunities, for strict implementation of labour laws, are unexceptionable.”
Dr. Singh claimed that the government had created 20 million additional jobs during 2004-05 and 2009-10. The unemployment rate came down from 8.3 per cent to 6.6 per cent in the same period.

Employment in the organised sector registered a growth of more than 9 per cent from 26.5 million in 2005 to 29 million in 2011. Women employed in the organised sector had also registered a growth of about 19 per cent in the same period.
Rural women were increasingly going for self-employment opportunities in ever-increasing numbers, Dr. Singh said adding that out of 44.32 lakh self-help groups in the country, 30.21 lakh were exclusively for women.
Labour and Employment Minister Mallikarjun Kharge said there was a significant reduction in the number of child labour in the country in the last five years. “This is primarily due to effective legislations like [the] Right to Education and MGNREGA [Mahatma Gandhi National Rural Employment Guarantee Act],” he said.
Minister of State for Labour and Employment Kodikunnil Suresh participated.

The conference was briefly disrupted by a union leader, who demanded a “reply” from the Prime Minister on alleged inaction of the Assam government despite promising a CBI probe into the killing of a colleague there in March. Subhas Sen, secretary of the Assam unit of the All India Central Council of Trade Unions, caused the interruption.

The table describes how to calculate the Dearness allowance with the input of All India Consumer Price Index (IW) month wise...