DISCUSSIONS WITH POSTAL BOARD ON STRIKE CHARTER OF DEMANDS ON 7TH FEBRUARY,2014


DISCUSSIONS WITH POSTAL BOARD ON POSTAL RELATED  ISSUES OF THE CHARTER OF DEMANDS WAS HELD ON 7TH FEBRUARY, 2014 WITH NFPE & FNPO. 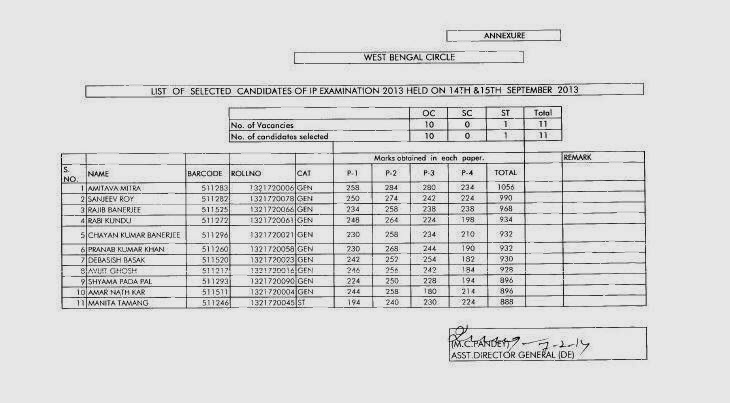 NFPE Group of Unions & GDS(NFPE)
West Bengal Circle
37, Ganesh Chandra Avenue, Kolkata – 13.
No: PC- 25/ Joint Movement                                                                                   Dated  05.02.2014.
To,
Sri J.Panda,
Chief Postmaster General
West Bengal Circle
Yogayog Bhawan,Kolk-12.
Sub: Sale of examination kits and collection of filled in forms through Post Offices-
case of West Bengal Central School Services Commission (WBCSSC).
Dear Sir,
West Bengal Circle has procured an order from West Bengal Central School Service Commission to sell examination kits for the exam of Teacher Eligibility Test and also collect filled up forms from candidates for transmitting to WBCSSC. Near about 6-7 lakh examination kits are being expected to be sold from Post Offices. About 847 Pos have been identified for this work, from which sale of forms has been started from 30 January’14. In no circumstances, we are against this type of new work, but unfortunately before implementation it would be better if Department would exercise the ground reality and also gather views of Staff side.
In some Divisions even single/double handed Pos have been identified though there is scope to select other nearby offices having comparatively more manpower. Every day we have been receiving information and also most of the daily Newspapers are giving coverage that there are scarcity of forms, though WBCSSC has already announced publicly that they have supplied sufficient forms. So during paucity of forms, people are getting ideas as if the Postal staff is suppressing the forms. Not only that, in a circular issued by WBCSSC (memo no.209/5277/CSSC/EStt/2014 dated 29.01.2014)it is mentioned that forms will be available from POs up to 8.2.204 till 5pm, sending a wrong signal as if counters will be opened till 5pm every day. So people are coming even at late hours  to collect forms. And in these ways our innocent employees are being left with peoples’ gauge and threats. Already in Birbhum Divn, Howrah, Hooghly South, Malda, Dinajpur, Midnapore, South Kolkata, South and North Presidency etc public agitation took place. Somewhere local people turned violent also inducing a panic atmosphere in concerned POs. Recently last date has been extended, but mere extension will not be only solution. Moreover, next phase of sale of forms will be started from 12 February’14. But you know it well that at the call of Confederation as well as all recognized organizations (like NFPE, FNPO) all Central govt. employees including Postal employees will go on 2 days’ Strike for 12-13 Feb’14.
In these circumstances, our categorical points are-
1)     Single/double handed offices should be changed as centre. Comparatively big offices should be identified with public notification of hours of business in Pos.
2)     All identified offices must be provided with sufficient forms to avoid public harassment.
3)     WBCSSC should immediately be approached so that next phase may start on / after 14 February’14, with wide circulation on daily Newspapers.
4)     Local administration should be instructed properly. It is learnt that in most of the Divisions, the local authority is paying practically no head on this serious issue, particularly during public resentment/ agitations/ violence etc.
5)     State administration may also be approached to provide prompt security arrangement as and when required for the safeguard of our staff.
6)
We think considering the gravity of this case you will take a prompt action for smooth functioning of the system as well as protection of our employees working at lower level.
Yours faithfully,
(Janardan Majumdar)
Circle Secretary, Gr-C
& also on behalf of above organizations.
Copy to all Br/Divns for intimation.
Posted by AIPEU, GR C, SOUTH PRESY. DIV. at 09:02

FIRST IMPACT OF TWO DAY’S STRIKE NOTICE
SEVENTH CPC CONSTITUTED. BUT NO DA MERGER
NO INTERIM RELIEF. NO MENTION ABOUT GDS.
NO CHANGE IN DATE OF EFFECT.
NO DISCUSSION WITH STAFF SIDE.
NO LABOUR REPRESENTATIVE IN PAY COMMISSION.
CONFEDERATION NATIONAL SECRETARIAT DECIDED TO GO AHEAD WITH THE 48 HOURS STRIKE.

NO COMPROMISE ON MAIN DEMANDS

Email ThisBlogThis!Share to TwitterShare to FacebookShare to Pinterest
Result of the Limited Departmental Competitive Examination for promotion to the cadre of Postmaster Grade -I held on 30.06.2013 in 21 Circles except Himachal Pradesh Circle.(Click the link below for details)
http://indiapost.gov.in/dop/Pdf/Results/result_pmgr1_949_03022014_pub_upload.PDF
Posted by AIPEU, GR C, SOUTH PRESY. DIV. at 09:21