COM. TAPAN SEN DELIVERED A SPEECH ON  THE MEMORY OF
COM. K.G. BOSE AT CENTENARY HALL, UNIVERSITY OF CALCUTTA 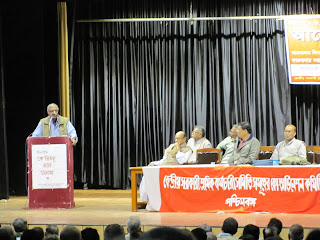 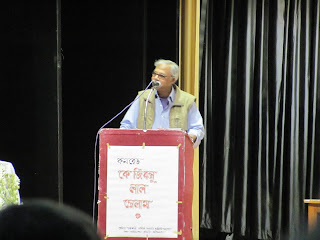 Com. Sen mesmerized a full house of audience in Centenary Hall, University of Kolkata, as he unfolded the intensity of spontaneous hatred of common people reflected against the International Finance Capital that is responsible for the increasing discrimination and polarisation of property, leaving unemployment and poverty for the 99% of world's population.
He also enlightened the facts of Maruti-Suzuki movement. Workers there did not demand more salary (though their salary is poor), they only formed their union. The leaders were sacked, local government supported the capitalist owners.
Comrades present in this seminar have been tremendously benefited from his deliberation.THANKS TO Com. TAPAN SEN FOR GIVING A GREAT SPEECH.
Posted by AIPEU, GR C, SOUTH PRESY. DIV. at 04:16